How To Play Poker

At Stick Pool Club we invite and encourage everyone to participate and enjoy in our Texas Hold’em Poker variant wherein we provide an experience like no other gaming platform in India. We provide our players with an opportunity to win cash or play for virtual coins as per their choice and have a healthy competitive gaming experience.

1. Poker is based on a standard deck of 52-cards wherein the Dealer shuffles it and uses it to distribute two cards to each player in a clockwise manner.

2. Every player is dealt two cards (face down) by the dealer, where the player can only see their own cards.

3. The dealer spreads 5 cards - 3 promptly, then another, then another. All players within the game use these shared in conjunction with their own 2 cards to create their very best five-card hand.

4. Before and after each card(s) is revealed, players take turns to call or raise. To stay in the hand and see the following card, all players must have put the same amount of chips in the pot as one another.

This is the highest poker hand. It consists of Ace, King, Queen, Jack and Ten, all in the same suit. As all suits are equal, all royal flushes are equal.

In-between two Straight Flushes, the one containing the topmost card has an advantage. An ace can be counted as low, so 5-4-3-2-A of same suit is a Straight Flush, but its top card is the ‘5’, not the ace ‘A’. The cards cannot “turn the corner” i.e 4-3-2-A-K is not valid to be a Straight Flush. Four of a Kind

Four cards of the same rank – such as four Queens where the fifth card can be anything. This combination is sometimes known as “Quads”. Between two Fours of a Kind, the one with the higher set of four cards is the winner. So, 3-3-3-3-A is beaten by 4-4-4-4-2. This consists of three cards of the same rank and two cards of another rank making a pair, for example 9-9-9-A-A. In the scenario where two players have Full-House, the person with a higher-ranked set of 3 cards would win. 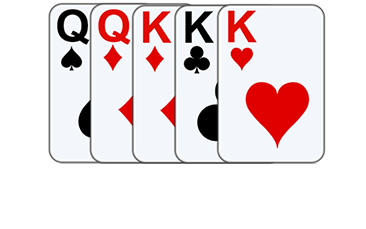 Five cards of the same suit irrespective of their ranking. In the case where there is more than one Flush among the players, the card ranking determines the winner. If the highest cards are equal then the second highest card is compared; if those are equal too, then the third-highest card, and so on. For example K-J-9-3-2/K-J-7-6-5 where the player with hand K-J-9-3-2 would win over the other player. Three of a Kind

Three cards of the same rank in a hand with the other two cards of different ranks. If there is more than one hand with “Three of a Kind” then the hand in which the three equal cards are of higher rank wins. So for example 5-5-5-3-2 beats 4-4-4-K-Q. Two pairs is a hand with a pair of cards of one rank, a pair of cards of another rank and one card of a third rank (also called “the kicker”). In case of a hand where two players have ‘Two Pairs’ then the player with higher ranking card’s pair wins. If in case the card rank of pairs is same then the fifth card’s rank is used to determine the winner.

A pair is a hand with two cards of equal rank and three other cards which do not match these or each other. When comparing two such hands, the hand with the higher pair is better so for example 6-6-4-3-2 beats 5-5-A-K-Q. If the pairs are equal, compare the highest ranking odd cards from each hand. In Hold'em, a marker 'D' called ‘the button’ or ‘the dealer button’ indicates which player is the nominal dealer for the current game. Before the game begins, the player left from the dealer button posts the "Small blind", the first forced call or raise. The player left from the small blind may post the "Big blind", which is typically double the size of the small blind, but the blinds can vary depending on the game structure being played.

Now, each player receives his or her two hole cards

In Hold'em, the available actions are ‘Fold’, ‘Check’, ‘Call’, ‘Raise’ or ‘All In’. Exactly which options are available depends on the action taken by the previous players

If nobody has yet made a raise, then a player may either check (decline to call or raise, but keep their cards) or call or raise.

To call is to match the amount the previous player has called or raised.

To raise is to not only match the previous call, but to also raise it.

After seeing his/her hole cards, each player now has the option to play his/her hand by calling or raising the big blind. Players turn action proceeds clockwise around the table, starting with the player ‘under the gun’ left from the big blind. As the round kicks off, players can Call, Raise, Or Fold when their turn comes. We would explain these terms subsequently.

For example, if the big blind was Rs.2, it would cost Rs.2 to call, or at least Rs.4 to raise. Action then proceeds clockwise around the table.

The game continues until all active players (who have not folded) have placed equal call or raise in the pot.

Now, three cards are dealt face-up on the board. This is known as ‘the flop’. In Hold'em, the three cards on the flop are community cards, available to all players still in the hand. Turn on the flop begins with the active player immediately left from the button. The turn options are similar to pre-flop, however, if nobody has previously opted to call or raise, players may opt to check, passing the action to the next active player clockwise.

The Turn (“or Fourth Street”)

When the players turn action is completed for the flop, the ‘turn’ is dealt face-up on the board. The turn is the fourth community card in Hold'em (and is sometimes also called ‘Fourth Street’). Another round of Call or raise ensues, beginning with the active player immediately left from the button

The River (“or Fifth Street”)

When the players turn action is completed for the turn, the ‘river’ or ‘Fifth Street’ is dealt face-up on the board. The river is the fifth and final community card. Call or Raise ensues with the active player immediately left from the button, and the same rules as before apply

The Showdown and the Winner

The end of this exercise is to let players make a combination of their cards or Community Cards to make a winning combination or Hand. If there is more than one remaining player when the final round is complete, the last person to call or raise shows their cards, unless there was no call or raise on the final round in which case the player immediately left from the button shows their cards first. The player with the best five-card poker hand wins the pot. In the event of identical hands, the pot will be equally divided between the players with the best hands

In case a player gets disconnected from the internet, the game doesn’t provide the extra time. If the player does not return within the 30 seconds the action is taken as check if allowed, else cards are folded